Top 10 Richest People In The World – What They Do And How Do They Earn So Much? 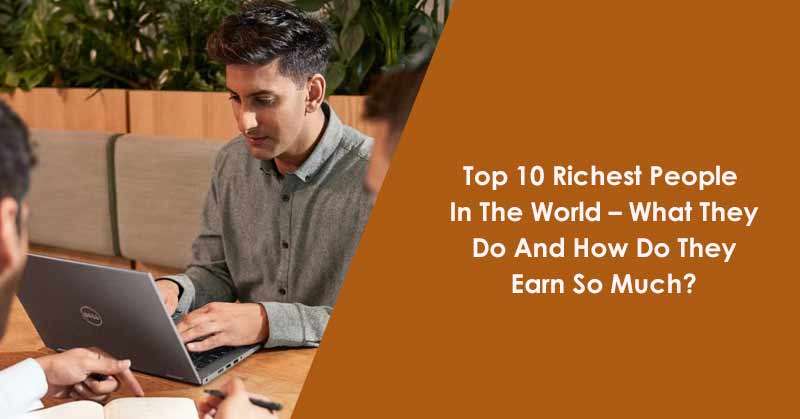 Money is the protagonist of today’s era. The more money you possess, the more you will get respect, recognition, appraisal, and attention. There are a bunch of ways available in today’s time to become rich, all that is required is Hard work with smartness, Persistence, Knowledge, and a Will to get what you want. Today’s blog is gonna be on the same note in which you will come across a few known personalities who have achieved a lot in their lives in terms of Money, Respect, Recognition, etc. We will let you know about Top 10 Richest People In The World through this particular post. Also, will be discussing the different work areas that they have mastered to be at the top.

Starting in descending order from top 1 to 10 on the list of  Top 10 Richest People In The World Have a look!

Elon Musk is at top of money-making personalities (richest man on the planet) with$265.4 billion-dollar net worth. He gains mostly from Tesla and SpaceX which two are his biggest investment of Elon. He also holds respective shares of multiple companies such as PayPal where he has connections with a group called “PayPal Mafia.” It would not be wrong to name him “A Revolutionary Of Modern Times.”

Along with it, he has recently acquired the biggest social media platform called Twitter for $44 billion dollars. He is the most influential personality as his statements can be responsible for turbulence in market statistics.

Bernard Arnault uplifts with its vast business in the luxury goods industry with the acquisition of many world-class brands such as Christian Dior, Louis Vuitton, etc. Keeping the top class into consideration, he has also climbed to the top of the food industry. He possesses a 47% stake in his own company; LVMH.

Arnault’s fashion brand is so big that it has 70 different brands, which are managed by his three siblings.

Also, in January 2021, Tifanny & Co. was merged into the panel for $15.8 billion, which is the highest in any luxury fashion. Apart from fashion and food, he also possesses several cruises and hotels that earn magnificently.

Jeff Bezos is a very popular name and is a super risky personality of all time. He is the owner of Amazon, which is the largest online shopping platform in the world. It provides all the customers and sellers a common ground to buy and sell whatever they want.

In spite of it, it also started Amazon Prime, and Amazon Web Series to provide entertainment at least price range. He is someone who has taken risks in his 30s and now has grown up as 3rd richest human on the planet.

Also, he was on top of the list of 2018 richest personalities with around $160 billion.

Currently, he has off to his company and possesses only a 10% stake. His current focus is Blue Origin, a sub-orbital space flight agency that is to save the earth.

Bill gates, is the co-founder of the biggest software company in the world. He was a tech kid since childhood and had developed a software program at the age of 13.

Microsoft is widely-used software for almost every organization in the world. With its vast usage, money generation is a natural process.

Like other firms, Microsoft has acquired several other businesses. Currently, Bill Gates has relinquished all the roles in the organization and has devoted himself to philanthropy via Bill and Melinda Gates Foundation.

Originating from India, Gautam Adani is the richest among Indian rich people. He gained business tactics and interest from his father, who was a businessman in the textile industry. However, Gautam has chosen other ways to penetrate his wealth. He saw potential in the diamond industry and from thereon he never turned back.

He is the founder of Adani Enterprises which is the leading authority of all subsidiary departments. His business indulges in different sectors such as Transportation, Energy, Logistics, and Mining. Adani has invested in green energy worth $44 billion to his net worth.

Warren Buffet is also known as the “Oracle of Omaha,” he is the greatest investor. He is inspired by the effect of compound interest and also suggests people understand its magic.

Warren Buffet has taken a pledge to donate 99% income to the charity. It is the biggest decision and shows how helpful his personality is.

Previously, he donated $41 billion to a charitable trust. He lives in an old home that he bought in 1958.

Oracle was founded in 1977 and from then on the company has been steered by Larry to make it one of the biggest Software and database companies in the world.

Currently, the Oracle is valued at $200 billion, and in this, Ellison possesses 40% of the stake.

His growth emerged with the surging development of Tesla and he gained almost 1000% growth on his capital.

He was also one of Tesla’s board of directors in 2018.

Larry Page is the co-founder of the world’s biggest search engine: “Google.” He was the CEO of Google from 1998 to 2001.

It is now the most used search engine and the most successful as well. The success can be estimated that only last year, the net ad revenue of Google has been $209.49 billion.

Under Google, there comes other successful company like Youtube, Play Store, Fitbit, Android, Nest, etc which are owned by Google itself.

Along with Larry Page, Sergey Brin co-founded Google and continued to be with the organization with similar stakeholding. Sergey was talented, of course, and did work for the development of the biggest used browser with the help of Larry Page.

They both met in college days and because of their alike mindset, they worked longer for their purpose and succeeded in1998.

Steve Ballmer was a friend of Bill Gates and studied together at Harvard. He was hired by Bill Gates on a $50,000 remuneration. He worked on Microsoft’s gaming division, mobile tablets, and Bing’s search.

In 2014, he left Microsoft and bought a Los Angeles basketball team valued at $2 billion.

He remains 10 or the last on the list of richest people in the world.

So, this was the list of Top 10 Richest People In The World. The post will have been informative and inspirational at the same time. Good Luck new billionaire!